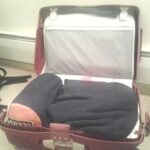 Unfortunately most of the data for this day is missing.

My flight arrived so late on the 19th that I had to camp at the airport!  Sleeping bag + mat + airport floor gave me 3h of sleep.  The zeo battery had run out but I do remember dreaming on two occasions.

travel light with a sleeping mat

Then 1h30 of train naps and finally the 17h nap displayed above.   No doubt after a week of very sleep deprived (~ 5.5h/night) monophasic schedule coming back to Everyman will be hard.  Tired after 20h. I’m feeling grumpy. In a sad mood. sleepy.

I am relieved to be back in control of my time, sleep and schedules.  Too excited to nap at 19h … too many things in my head, buzzing with ideas. Around 20h however, my body called for a rest … which I didn’t give it as I had a 2h phone conversation which I needed to finish.  This lead to a very exhausted me at 22h … but I forced myself to stay awake until 23h to talk to my girlfriend.  This obviously will make me fall asleep instantly, but will probably affect the morning.

I think the headband lost contact with my skin through the night (and thus the gaps).   It also took a while to fall asleep for the 17h nap as I was excited.   I have to remember my own rules and spend 15mn away from the computer before going to bed.  I think the difficulty with evening naps is just a result of the new adaptation process.

23 April
All normal, but a little delayed on the nap schedule. I ran 3 miles.  I’m adapting again to my naps.

24 April
All normal, very awake in the morning.  I think I’m almost adapted.  I think the sleep deprivation from the previous week made it easier to continue napping through the day.

I overslept a bit at 15:30 … I must have set the alarm wrong.   Due to dance class and an important exam my girlfriend had to take I had to miss the 7pm nap.  So I’m going to give myself 4h at night to catch up.