Day 26:  It was a difficult morning.  This was most likely due to yesterday’s strange naps (predominantly light sleep) which didn’t feel very re-energizing and left me tired through much of the day.

However the rest of the day was normal.  Good level of work with about 10h of computer and 1h of exercise, … with some cooking and talking sprinkled in for good measure.

Day 27:  Oh Boy!  It happened again!  My last nap yesterday wasn’t ideal (see only 16mn above) and to make things worse, when I woke up at 2:45 it was in the middle of light sleep (which makes me groggy) … so I must have snoozed and totally overslept.  Of course by “overslept” I mean sleeping 5h55.  But surprisingly I felt wide awake after that.  I felt a little tired around 9am for 20mn but it was pretty much impossible to nap at mid-day, so I had to wait until 16:30.  I can definitely say that my body is starting to adapt in some form or another.   This can of course be seen as a failure to stick to the schedule, but I see the other side of the coin:  a few months ago, when I slept 6h at night I would feel tired, and would have a horrible time getting out of bed (I had to go to work without my 8h!!?).  Today, I sleep 5h55 … and I feel incredibly rested and awake.  So clearly, in spite of the mess of the past couple of days and in spite of this over-sleeping something is happening inside me.  But I’ll admit I’m not yet convinced about the possibility of fully adapting.

Today I experienced a somewhat dramatic event.  And just to show that I still keep my mental functions in working order (well, as good or bad as they used to be anyway), I’ll relate it here.  After my afternoon nap I went for a 12km bike ride to exercise and get some chores done.  On the way back I saw quite a bit of smoke in a field and attributed it to agricultural waste burning.  That farmer is burning a lot of stuff _ I thought.  But the flames were unusually high.  It got me worried.  I stopped.  Was anyone supervising that fire?.  It was too far to see. And then … black smoke, … and what looked like the tire of a truck.  Hum … dodgy!  I stopped a runner:  “can you tell me this address?  Don’t you think it looks unusual?“.  That monophasic runner ignored my concerns and ran on with his ipod.  But something wasn’t right.  So I stopped another cyclist, urged him to give me the address and I phoned the fire brigade straight away.  A few minutes later I trespassed onto their field to wave, shout and try to alert them.  The fire was already out of control eating away at a tractor, a pile of grass and starting with a little woodland. 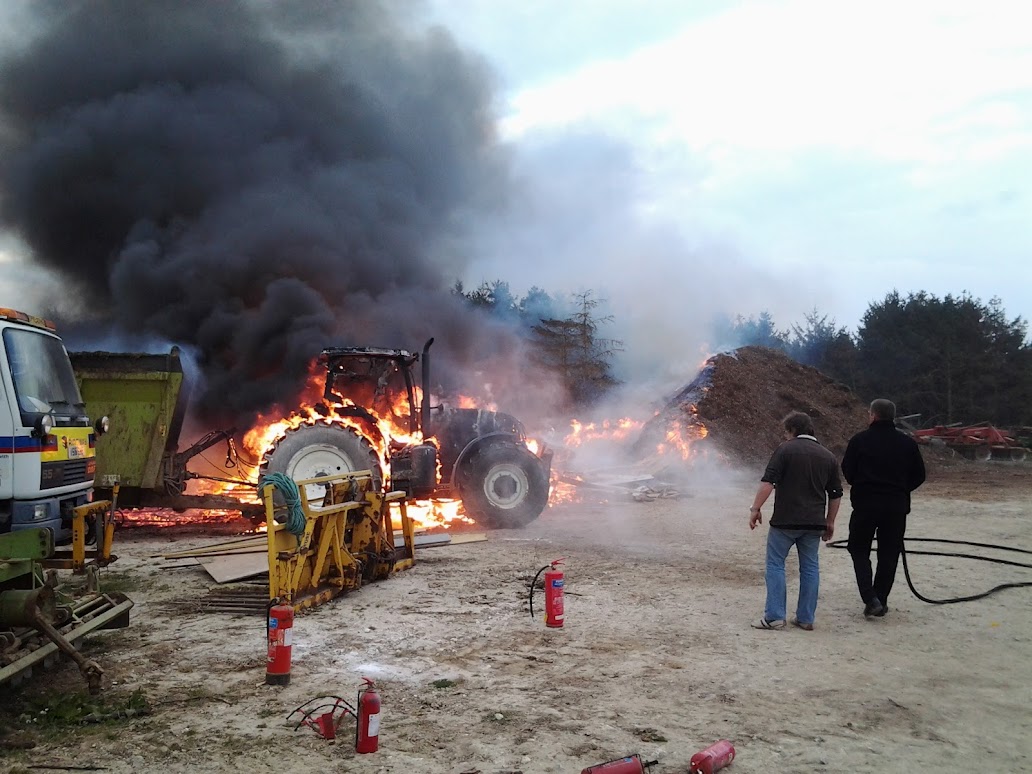 fire in a nearby farm

Fortunately the fire brigade arrived at  this moment (picture) and were able to get the fire under control in 2h.