Day 22: Things seem to be getting easier.  The morning hours are quite productive even if naps don’t always fall into place.

Day 23:  Unfortunately … back to a tired morning … probably due to the failed last nap on the 22nd.

I leave you today with a little video to show that I’m not the only insane scientist doing this sort of experiment.  Already in the 1930s Chicago University scientists were experimenting with shifting sleeping patters:

In 1938 two sleep researchers, Nathaniel Kleitman and Bruce Richardson, retreated for 32 days into Mammoth Cave in Kentucky to find out. Deprived of environmental cues, they tried to switch to a 28-hour sleep cycle. After 32 days, their beards were superb but their results inconclusive.

Unfortunately I have not found their original paper.  In any case, this experiment was the precursor of many others trying to establish more rigorously if there was an internal clock regulating our sleep.

The first major finding from these experiments was that the subjects’ circadian rhythms persisted despite this isolation, which proved that all human beings have an “endogenous clock” inside their brains.

But these experiments also showed that this clock was not perfectly accurate: it lost a few minutes every day. In other words, the subjects’ natural endogenous circadian cycle was slightly longer than 24 hours, ranging from 24.2 to 25.5, depending on the study. This may not seem like much, but if someone’s cycle lasted 24.5 hours instead of exactly 24, then within 3 weeks, everything that he used to do in the daytime he would end up doing at night!

In 1962, the French researcher Michel Siffre spent two months in an underground glacier in France’s Maritime Alps. He was 23 years old at the time of this first experiment, and he spent two more long periods underground later in his career to measure how the absence of time cues affected his biological rhythms at various ages.[/fact_quote]

Chart showing the shifting of the night time as the subject is deprived of light cues (a similar phenomenon is observed for the body temperature). 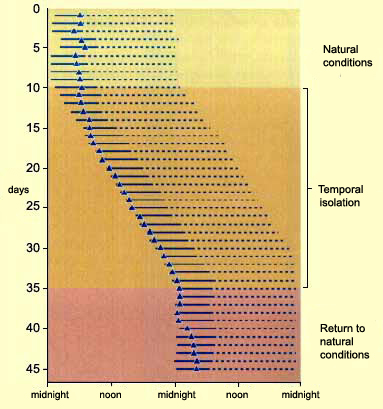 [fact_quote]
Siffre used a one-way communication system to tell his research team back on the surface the times that he woke, ate his meals, and went to sleep, but he received no information from them, and he had to estimate the passage of time on his own. When he emerged from underground, the actual date was September 17, 1962, but he thought it was only August 20, thus confirming how hard it had been for him to subjectively recognize how his biological cycle was lengthening.

[…]
Nowadays, many laboratories are equipped with rooms that are completely isolated from any fluctuations in light, sound, and temperature in the outside world. Volunteers can thus spend several weeks in temporal isolation, or in “forced desynchronization”, a protocol in which they are subjected to days lasting less than or more than 24 hours. These specially equipped rooms make it far easier to monitor variations in the subjects’ physiological parameters during such experiments.
[/fact_quote]

[5] The Welcome Collection Pictures on Sleep